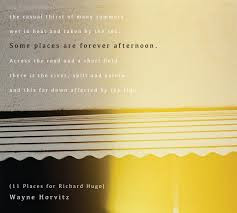 Do not take Wayne Horvitz for granted. He is not fixed into the scene like a peg in a hole. His latest album, Some Places are Forever Afternoon (Songlines 1612-2), subtitled "11 Places for Richard Hugo," is a collection of interrelated compositions inspired by the places the poet dwelled in and the verses that came out of his place in that space.

It is music redolent of the American West that Hugo immersed himself in. It is music that conveys a musical evocation, each piece taking inspiration from a line or two of Hugo's verse.

Beyond that it is contemporary composition of a modern jazz, post-jazz sort with space for improvisations but an emphasis on the seven-part writing and how it can evoke something of Hugo. But then it is more besides. You find yourself in boogie blues rock territory for a few minutes, for example. You find yourself in various musical settings, some more compositionally formal than others, but all brilliantly conceived and realized.

Each instrumental artist injects something of self into the parts, whether improvisatorily or in the interpretive reading, the realization of pulse and texture. Like Duke's music, this suite thrives in the way the parts work for the ensemble artists. Ron Miles takes some beautiful solos, too!

It is music that has that special something that captures moments in the contemporary air, things that very much sound like they grab at the possibilities of the contemporary as it lays out potentially, but then ultimately come at you in a distinctively Horvitzian manner.

It is not quite "Americana," in that it is very personal and less "universal," but it surely captures some local elements and transforms them. You find for example, that you have entered a sort of country and gospel realm, but not so much literally as transformatively. And so it goes throughout.

The music has such image-ination that it speaks far more elegantly than I can with words this morning. Suffice to say that the music gives you, the listener, a wealth of connotations and a hearty population of meaningful ghosts of thought-images, all to do with I guess the feeling of "being there" that Richard Hugo so vividly conveyed in verse.

It is a milestone compositional offering by Wayne Horvitz. It gives us a depth of field that reminds us that Horvitz has a multi-dimensional musical imagination. It is music to hear right now. A fantastic achievement, really. Viva, Wayne!

Posted by Grego Applegate Edwards at 8:00 AM