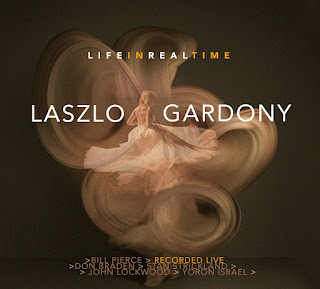 Laszlo Gardony has broken out of the pack in the past few years to establish himself as a creative force, a contemporary modern jazz pianist and bandleader of note and promise. I've covered several of his albums here (check the search box) and am now happy to talk a little about his new one, Life in Realtime (Sunnyside 4019).

This one finds Laszlo fielding a together rhythm team of self, John Lockwood on bass and Yoron Israel on drums, plus a three-tenor lineup of some potent voices: Bill Pierce, Don Braden and Stan Strickland (the latter doubling on bass clarinet as well). I've appreciated Stan since his days with Baird Hersey's Year of the Ear and he still sounds great. The other two have crossed my ear paths fortuitously over the years as very articulate hard post-boppers. Yoron is a drummer's drummer and shows why that is so on the album. Lockwood locks in with Yoron and Laszlo for some significant modern pulsations.

The entire album was recorded at Berklee's Performance Center a year ago. It has the sort of spirited thrust of an engaged audience-performer intersection, making the music climb several notches higher than a studio date ordinarily does.

The music is first-rate contemporary jazz heat, with lots of blowing space for all and a particularly fine showing in that wise with Laszlo and the three tenors. From "Impressions"-like modal blowing to hard bop to reworkings of the standard "Lullaby of Birdland" and originals, it all takes pride of place as a very engaged and hard charging foray into the modern jazz arts.

And so we have a strongly rooted set that sets about to restructure ageless contemporeinity, to fashion it into the shape of the spontaneous now. Good pianism and lively tenor explosions are especially out front for a happy result.

Nice! And another notch in the Gardony belt at that.

Posted by Grego Applegate Edwards at 5:47 AM