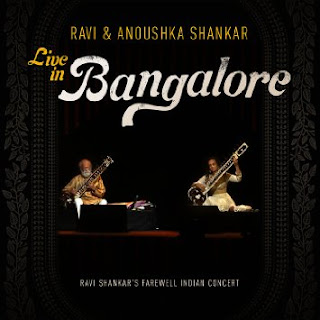 The passing of India's most prominent musician Ravi Shankar in a way put an end to an important phase in Indian Classical music, one where the excellence of the tradition and the innovations of the present-day era were especially and artfully embodied in a single figure who achieved for the music a world awareness and appreciation as never before. And of course the music lost one of its very most brilliant sitarists and composers, a Master for the ages.

In his last years, through increasingly frail, he made excellent music that may not always have had the speed of execution of his prime period, yet his brilliance and inventive genius remained intact. And so it was on February 7th, 2012 that he, his illustrious daughter Anoushka and an excellent ensemble appeared in what turned out to be his farewell performance in India.

Fortunately for us the audio and video equipment were running so that we can now appreciate that two-and-a-half-hour concert in a state-of-the-art collection of two CDs and a DVD--on a set entitled Live in Bangalore (East Meets West EMWM1014).

As one has come to expect Maestro Shankar fields an excellent ensemble. His daughter Anoushka on second sitar, Tanmoy Bose on tabla, Pirashanna Thevarajah on mridangam, Ravichandra Kulur on flute, Sanjeev Shankar on shenai.

The DVD includes the opening portion of the concert, with Anoushka Shankar heading the ensemble in a wonderful mix of ragas and a Ravi Shankar composition originally meant for sitar and violin, here performed quite nicely by sitar and flute. Anoushka is an accomplished and fully flowered sitarist in her own right and she gives a great performance to set the tone for the evening. This part of the concert is on DVD only due to space considerations, but no matter.

In the second half Ravi joins the ensemble. He and all concerned show a loving joy in the creation of musical magic, which is most moving to see. Several ragas feature Ravi in inspired alap and gat sequences, with Anoushka joining in the composed sections and engaging in some jugalbandi interplay with Ravi. Flautist Kulur also plays an important role. Raga Tilak Shyam is especially moving, with a very inspired Shankar and truly lovely compositional elements.

The mrindigam-tabla solo duet is phenomenal. And the grand finale gives the entire ensemble a chance to shine brightly.

Since Anoushka is very much still with us we feel the loss of the Master acutely but we appreciate her artistry here all the more, as she will be with us for years to come to carry on and expand upon the tradition. Such is how it has been for a thousand years and a thousand years to come.

Anyone who loves Indian Classical and Ravi Shankar will find this a wonderful documentation of his last years as well as a very beautiful example of the classical art. Highly recommended!