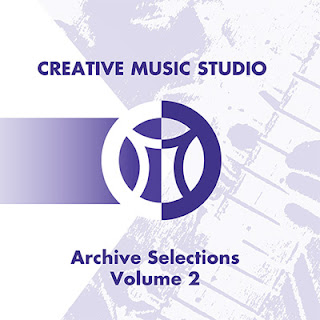 In the latest release, Creative Music Studio, Archive Selections, Volume 2 (Planet Arts 301547 3-CDs) we get a wide assortment of never before released gems from Karl Berger's Creative Music Foundation concerts at their center in upstate New York during the fertile period of 1976 to 1981.

There is so much here that is very good and absorbing in varied ways that it defies easy summarization. Each disk in the three-CD set is devoted to a particular ensemble configuration. CD One covers Small Ensembles. To be heard are a duet between Anthony Braxton and Marilyn Crispell, the Kalaparusha Trio, a two piano piece by Frederic Rzewski and Karl Berger, the Paul Motian Trio (with David Izenzon and Charles Brakeen), and Lee Konitz doing a version of "Oleo" with Berger and quintet.

CD Three covers world music and perhaps is the most surprising of the three disks in its thoroughly advanced world eclecticism. There is an ensemble headed by tablaist Ismet Siral, a vina solo by Ustad Dagar, a duet between percussionist Aiyb Dieng and Karl Berger, a trio headed by Paulo Moura on reeds, a djembe solo by Amadou Jarr, and a Colin Walcott ensemble with Colin on sitar, Nana Vasconcelos on percussion, Trilok Gurtu on percussion and Aiyb Dieng on percussion.

What's most important is that it captures a broad spectrum of new improvised music/jazz at a crucial period and documents music and ensembles with examples that flesh out the recorded legacy of these artists with music that differs from or extends the recorded repertoire in very good ways.

To hear those now gone in rare settings--Walcott, Cherry, Motian, Kalaparusha--is to be given very good examples of why they are so missed by us all today. But there are many good and unusual performances from those still with us, too.

It is a testament to the importance and vibrancy of the Creative Music Studio and the artists that graced us with their presence there. The three-CDs are welcome additions, fertile explorations, genuine adventures made at the height of the loft scene and the aftermath. And it of course is a tribute to Karl Berger and his creative presence both in the musical examples and as the organizing force behind a critical institution.

It is all very worthwhile, music you I think will be glad to have and hear repeatedly. Outstanding!