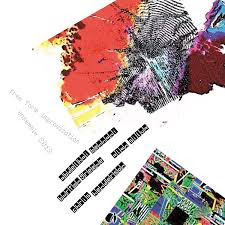 If you want to experience the roots of new thing-avant free jazz-avant improvisation, you of course can go back to Ornette Coleman's classic first recordings, early Paul Bley, Cecil Taylor, Albert Ayler's first recordings and . . . the Free-Form Improvisation Ensemble. The latter is no doubt the least known but very important and pathbreaking. The original version of the band (which features Burton Greene and Alan Silva) can be heard in a recording from 1964 (see my review from February 19, 2010 http://gapplegateguitar.blogspot.com/2010/02/pioneering-music-from-free-form.html) that is astoundingly ahead musically.

Now some 40 years later, we get a new incarnation of the Free Form Improvisation Ensemble 2013 (improvising beings 40, 2-CDs) and it is a fine thing to hear. Back are Burton Greene on piano, Alan Silva on orchestral synthesizer, plus Abdelhai Bennani on tenor (who passed away, sadly, not long ago) and Chris Henderson on electric drums.

With so much time passing, so much music by Greene and Silva happily coming to our ears, one would not expect for this fortuitous reunion that the artists would sound precisely the same as they did then. And of course with Bennani and Henderson in the mix, there are important new voices to contribute as well.

Surely this recording shows us a new, evolved freedom. It is not the same music. But look around you, see how much has changed in our world, so how would we expect seminal free music pioneers to have the same musical outlook? This is nevertheless inspired free music, music of today, and we are all the better for it.

Alan Silva's orchestral synth playing gives the group an expanded harmonic and textural base that pulls the music into new territories imaginatively and adroitly, and Burton Greene responds to that sonic directedness with playing that works excellently well, thematically inspired, fully congruent. The two form a dynamic center that Abdelhai Bennani applies his special tenor phrasings to, sounding perfectly right and in total control over his sound and its place in the whole. Chris Henderson embellishes the totality with a vibrant set of colorations wholly right for the spontaneous events at hand.

Saying all that is not saying enough, though. We get two full CDs of music that expresses a contemporary freedom rich in ideas, filled with very directed music that constitutes not a reworking but rather a culmination of 40 years playing and reflecting.

It is the work of seasoned masters, with brilliance and a richness of invention that rivals any free ensemble out there today for focus, relevance, and the excitement of the now.