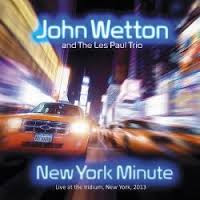 John Wetton is one of the iconic vocalists of our times. His work with King Crimson and UK, and later on his own, put him in that special original stylistic vocal place in prog along with Jon Anderson and Greg Lake. He appears in a slightly different context before us here in a live date at Irridium in New York, 2013, with the Les Paul Trio after Les had left us.

New York Minute (Primary Purpose 003) brings together Wetting in great vocal form with Nikki Parrott on bass, Rodney Holmes on piano and Lou Pallo on guitar. It is a program of modern standards from the rock and pop of the later 20th century and then a couple of Wetton songs for good measure.

This is not precisely jazz, nor is it precisely rock in the hard-hitting sense. It is a sincere effort to showcase some songs that Wetton has found transformative, as have many who lived in his times, including me. So we get Steely Dan's "Do It Again," Marvin Gaye's "What's Going On?", Brian Wilson's "God Only Knows," Winwood's "Can't Find My Way Back Home" and Dylan's "All Along the Watchtower," among others.

The combination of Wetton's clarion voice and the straightforward treatment of the well-known songs outside of Wetton's usual purvey may perhaps seem like something puzzling before you hear it. Once you do, well if you are like me, there you are. It is the power of Wetton's voice that carries it convincingly, along with a solid instrumental backing.

It came to me as a pleasant surprise. It rings true. It may not topple the applecarts of the establishment, but that's not what it is for. It's quite nice, I must say. And it leaves you feeling like you've heard something worthy. And so you come back to it again and feel again the pleasure of it. That's how it is. Check it out.