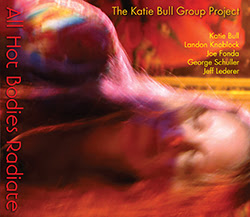 I happen to believe that the hardest thing to get right in modern avant jazz is the vocals. Using the human voice as an expressive instrument is no simple matter. It calls for dexterity, imagination, and exceptional musicality. Katie Bull finds her own way on these often treacherous paths. Perhaps her very best effort just came out--The Katie Bull Group Project and All Hot Bodies Radiate (Ashokan Indie 101).

It's a band that coheres with Katie's compositions at the center. Joining her is a select group of players that can take things wherever they need to go. Landon Knobloch is on piano and electronics, George Schuller is on drums, Jeff Lederer on soprano and tenor, and Joe Fonda on bass. These are some of the most inventive on the New York scene today and they respond to Katie's music with a free propulsiveness and creative improvisational stance that puts it all together.

Other than the beautiful standard "If I Loved You" these are all Katie's compositions, with poetic immediacy and substance. The combination of the musically astute qualities of the band and Katie's unforced, natural, multitextured vocalizations is a winning one. She utilizes all the dictional and timbral resources that go into being herself. And she knows when, critically, to stretch into the outside realms and when to root herself in a jazz-noted rubato. It of course exemplifies her own personal, original approach to new jazz vocals. It is not the only way to go out there, but it is a way that establishes Ms. Bull as very musically herself.

Now beyond saying all this, there is something that clicks throughout the album, something beyond words, different enough that you may need to hear this a few times to get used to it. I did. And in the end I come away from this one with a clear sense of Katie Bull the artist. She is a poet, a finely honed instrument, a force in the improvisatory arts. And the band works with her to create something unified and strong, new and ahead yet rooted and structured.

She is a vocalist and artist of completion and broad horizons, a great phraser, a golden instrument and a poet-composer and bandleader that comes through here with beautiful artistry. She is at the top of her game. And it's a great game! I am glad to have this one and I think you will be, too.