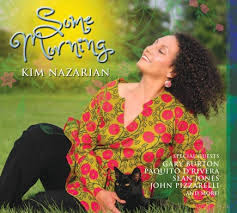 With all the hoopla surrounding Frank Sinatra's 100th birthday we are reminded just how much the swinging jazz-inflected singing of "standards" and contemporary song remains very much alive. Of course Frank was a master artist and deserves remembrance regardless of what is stylish nowadays or no. But frankly there seem to be so many singers working within the standards jazz paradigm that I marvel at the current superabundance. So I hear a great deal of it in the course of my preliminary listens, but I only have the time and space to cover the very best of them.

And it perhaps all fits with the looking-back masterpiece series "Madmen," doesn't it? I watched with rapt attention as the paradoxical complexities of the era were re-presented to us. Why has to do perhaps with the shock of recognition: the past is very past by now, whatever it represented. Plus the bachelor pad phenom has come to our collective folk memory and vocal jazz fits in that mold often enough. I should not be surprised that a rethinking of the music of that era should be very much with us.

Kim Nazarian rises to the top of the many vocalists practicing today, and so I am happy to write about her album Some Morning (KIMG Music). This is Kim's first solo outing. She has been an integral member of New York Voices, whose music I've happily covered here. The album and Kim's beautiful vocal instrument is greatly aided by her full-band arrangements and the appearance of some notable sidemen, including Gary Burton, Paquito d'Rivera, John Pizzarelli, and Roger Humphries or my old Boston roomie Jamey Haddad on drums.

We get some fine standards in "Robbin's Nest" and "What'll I Do" and some things that stand out in the newer, original vein, such as the very lyrical "All in My Heart."

Kim's beautiful tone, impeccable phrasing, hip scatting and jazz immediacy carry the day. It is an album put together with great artistry and attention to detail. And so it no doubt serves as a model of how to do it right. Most importantly, though, it establishes Ms. Nazarian as at the forefront of mainstream jazz vocalists today. And it grabs you and enthralls you the more you listen. A breakthrough vocal talent and a very worthy album this represents!