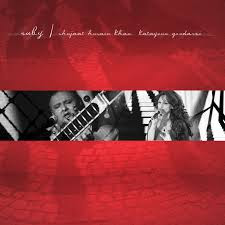 I was planning to cover today's album regardless of world events, but Donald Trump's vitriolic racism of late prompted me to respond immediately with this musical example. Only a racist sees the culture and practice of major world religious groups as monumentally singular and evil. Fact is Eye-sill is a rogue upstart in a Mideastern world, a dangerous group threatening to all other Mideastern polities as well as the West. They are no more representative of Islam than Hitler was of Christianity, or for that matter, Trump is of Christianity. They are barbarians in a region where Judaic, Christian, and Islamic civilizations continue to thrive, where it was born. The three "people of the book" have much in common, a shared heritage belied by extremists alien to the traditions of civilization's heartland.

So to counter that we have some beautiful music based on the poetry of the Persian master poet Rumi, one of the cornerstones of world civilization, a genius among geniuses. It is music in the Indo-Pak classical tradition, arranged by sitarist Shujaat Husain Khan and sung beautifully by Katayoun Goudarzi. The words are in Persian, based on the poetry of Rumi, but it is not necessary to know Persian to appreciate the lovely music here.

Along with Khan's lively sitar we have a fairly large Indo-Pak ensemble of master players of the flute, tabla, sarangi, santoor and percussion. It is very engaging and inspired music. Music brings peace. I hope people can hear this music in the spirit of appreciation and yes, in the spirit of solidarity with those oppressed and in opposition to our common enemy.