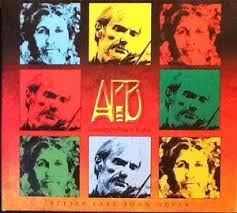 I promise on these pages to cover rock song and such, and so I unleash today a review of something very good in that mode.

If Yes was a different band altogether and featured Jean Luc Ponty on violin and Jon Anderson on vocals, that's pretty much what you'd get, nicely, with the AndersonPonty Band. I have been watching the DVD and listening to the CD for their recent release Better Late Than Never (Liaison Music 4034), and though I didn't know quite what to expect, it turns out that the band and all concerned are most definitely coming at us with first-rate prog-fuse.

The band is tight and "soundful" in the best sense. Anderson and Ponty are joined by Baron Browne on bass, Jamie Glaser on guitar, Rayford Griffin on drums and Wally Minko on keyboards. These sidemen have much in the way of musicianship and the arrangements give consistent ignition to the material.

Jean Luc is out front very sonorously as the principal soloist and sounds as good as ever. Jon Anderson has lost none of his vocal abilities and matches the Ponty sonority with his own special vocal timbre.

There are some redone Yes classics to be heard here, just different enough that there is freshness and genuine new life to them, even with something like "Roundabout" but also "Owner of a Lonely Heart" and "Time and a Word." There are some new songs, too. They are good.

Both on the live DVD set from a concert at Aspen and on the CD, the band has a happy confluence that I'll admit I was not ready for until I listened a couple of times. It is a beautiful set from a band who most definitely HAS it.

Well, so if you have a place in your heart for prog this will turn you on, I suspect. If my Mets baseball watching this October-November got in the way of DVD time, blame that for my late response. Better Late Than Never, of course. Dig this one.