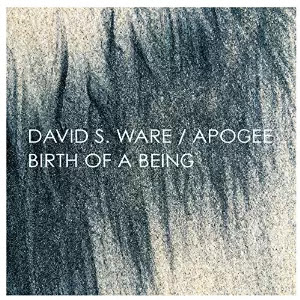 How much we have lost with the passing of tenor titan David S. Ware is especially clear when you listen to the expanded edition of his first recording as a leader in 1977 with his trio Apogee, Birth of A Being (AUM Fidelity 096/97 2-CDs).

Plain and simply, it is a remarkable recording. The original, shorter version was put out by Hat Hut as an LP in 1979. And now for the first time we hear the complete session. Joining David's tenor is the energetic all-over piano of Cooper-Moore and the virtuoso force of drummer Marc Edwards. This is the right band for David's avant-spiritual power debut as each member of the group comes through with performances that parallel Ware's in their creative onslaught of significant sound.

For the expanded version of the album we get the Hat Hut material remixed plus a full CD of additional music, including a worthy alternate take of "Prayer," the lengthy numbers "Cry" and "Stop Time, a brief "Ashimba" (Cooper-Moore on his hand-made xylophone) and a Ware unaccompanied solo tenor spot. Put that together with the original released version and you have a hugely impressive date, with David on fire with passion, energy and that great big sound he had already mastered.

Marc Edwards by then had perfected his very busy, driving and dense free drum style (he and David were key figures in Cecil Taylor's band during this period) and Cooper-Moore had developed a strong presence as a convincingly engaged, extroverted and very musical splatter-note pianist. They form with David a highly combustible unit at its peak, absolutely driven and devastating in their expressive power.

The music goes from strength-to-strength in a blazing meteoric flight across the firmament. This is some of the most engaging free jazz of its time, without a doubt. It's been 30 years since the original LP went out of print, but the time is most definitely now for a re-appraisal of this trio and the full impact of the complete session. It is phenomenal music!