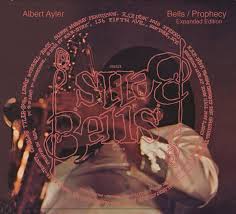 ESP happily gives us a new deluxe, expanded edition of Bells/Prophecy (ESP 4076 2-CDs) and it is most welcome. It includes the Town Hall, NYC, 1965 Bells, originally issued on ESP as a single-sided LP back then a bit after its May 1965 recording date. It was an expanded Ayler configuration of Albert, his brother Donald on trumpet, Charles Tyler on alto, Lewis Worrell on bass and Sunny Murray on drums. It is classic, essential early Ayler and if you do not have it, you no doubt should if you are an Ayler acolyte.

The Prophecy sessions go back a year to June of 1964, just a month before the seminal Spiritual Unity date inaugurated the Ayler sound that was to be so revolutionary and influential in the new jazz community. Like that studio session Ayler joins with Gary Peacock on bass and Sunny Murray on drums--for an extended live recording on location at the Cellar in NYC. What you hear as the cuts following Bells on CD I was originally released around a decade after they were recorded as a single ESP LP entitled Prophecy. The entire CD II is a continuation of that date that was originally issued in France as  Albert Smiles with Sunny. I missed that second volume completely so am especially happy to have it rejoined with the original issue.

It is a thoroughgoing exercise in Albert's patented fire-tongued tenor effusions with long versions of his classics from the era and a few others that never saw duplication elsewhere to my knowledge. Albert blazes with great heat, Gary Peacock has plenty of space to work on his free bass ideas and Sunny lays down the free wash of open rhythms that became so critical an aspect of free jazz from thence onwards. This may not have the concentrated impact of the studio album but it is a fine set of performances nonetheless.

It is more essential Ayler from the era.
Posted by Grego Applegate Edwards at 9:22 AM