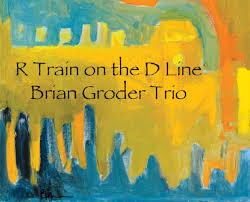 The Brian Groder Trio has a new one, a welcome volume two. The trio with bassist Michael Bisio and drummer Jay Rosen scored big with me in 2014 (see July 24, 2014 article) with their first outing, and this one is as good or even better than that one. R Train on the D Line (Latham Records 6001) has a CD release date of April 13th but can be gotten at i-tunes in the meantime, as I understand.

Brain Groder is the thinking person's trumpet-flugel master and composer, to my mind. His compositions are complicated modern vehicles with a readily grasped core. They serve as excellent launching pads for the profound three-way goings-on between Groder, Bisio and Rosen.

Jay Rosen has made his mark as a member of Trio X (the trio with Joe McPhee and Dominic Duval) and sounds especially great on this album. He is a drummer of acute sensitivity, poise, swing and sound color.

Michael Bisio one of modern avant jazz's foremost bassists, often found these days as a member of Matt Shipp's wonderful trio. He shows why he is so highly regarded here, with some formidable contributions to the whole. You might listen to his playing in itself on these tracks and gain much, but of course his playing blossoms forth as an inegral part of this trio music.

Brian Groder gives us eight substantial compositions that form the basis for the angular geometric togetherness and bright improvisations to be heard. His special unvarnished but directly communicative prowess on his horns make the music come vibrantly alive. The music swings mightily and as needed crosses the border to freely articulated timelessness that nonetheless swings with the same energy and drive as the time-based grooving.

Everybody connects with a most eloquent unleashing of meaningful and moving music speech, something that is as rare in this realm as it is in the spoken word world we otherwise inhabit. They SAY a great deal, in other words, and what that is should very much be heard!

It is some music that brings you a model of how new jazz has evolved over the years to incorporate the expressive opening up of the music in the '60s into a new kind of superlative classicism. It thrives as chamber jazz but decidedly not of an anemic sort, far from it.

If you want to know something of where new jazz is today, I recommend this volume heartily. It has much great music to explore and unwrap. This is art, and a fine art indeed. Get a copy!!