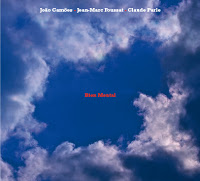 Three masters of the adventurous art of avant improvisation join forces and give us an album that deftly explores the outer realms of possibility in spontaneous music making. It is Joao Camoes, Jean-Marc Foussat and Claude Parle and their Bien Mental (Fou Records CD 12). It manages to create three exceptionally advanced sonic tapestries composed in various ways by Camoes and his viola, Foussat and his live electro-acoustics, and Parle and his accordion.

What they create are free new music statements, sensitive, creative and extraordinarily alive spontaneities that are inspired, wonderfully colored and musically significant. It is music of an abstracted sort in the lineage of great ensembles such as MEV and il Gruppo, only distinctively original.

The sustain possibilities of all three instrument complexes can give us considerably varied masses of sound as well as punctual outbursts operating in a fascinating sort of dialectical relationship. There is great energy at times, relative repose and an intimate chamber sound that can become alternately huge and almost orchestral. To say that this is music of our time is a truth, but as far as a literal representative meaning to the abstractions I would say that you may build a dialogue of meaningful interactions in your mind but that the music first and foremost simply is. What you hear in it comes after the fact of the artists' determination to commingle advanced sounds and let them have meaning as the considerably fulmanous sonic abstractions they are, but fulmanous in a non-literally directed sense.

Well, so the point is that the music SOUNDS beautifully. It is an achievement. A masterpiece of its kind. This is landmark avant improv. So you should get it if that means a lot to you as it does to me. Highly recommended.