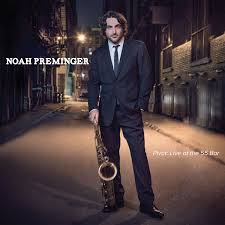 With apologies for my tardiness, I am happy to report on the still-young (despite my tardy review) tenor sax rising star, Noah Preminger. His latest, his fourth, is Pivot: Live at the 55 Bar (self-released). Now I must say that this album comes at just the right time. We get the best sort of picture of Noah and how far he has come, with an excellent band and two very long and loose versions of classic Bukka White blues perennials, "Parchman Farm Blues" and "Fixin' to Die Blues." It is the sort of live recording that reminds you why jazz often sounds best in the intimate club setting. I think of Booker Little and Eric Dolphy Live at the Five Spot or Ornette Coleman's Live at the Golden Circle or even Coltrane's original Live at the Village Vanguard, or Miles at the Plugged Nickel for precedents. No, I would not put Noah at the supreme pinnacle of jazz achievement of those masters, not yet anyway, but there is the unleashed energy of the joy of playing in unbuttoned fashion for a genuinely appreciative audience that this album shares with those absolute classics.

The band is excellent in Noah, trumpeter Jason Palmer, bassist Kim Cass and drummer Ian Froman. Noah and Jason have plenty to say and they say it beautifully. This is a free and supercharged kind of blues and so they take plenty of liberties, not fearing to stray boldly outside of "polite" limitations, or emotional straight-jackets, or harmonically academic note choices. And the same thing applies to the rhythm section. They let loose and swing madly and uninhibitedly the way one hopes for in the live setting.

Noah gets a real froth going and shows us he is headed up and out, and finding original ground. Jason Palmer has that brass-proud Morgan-Hubbard extroversion in his own way and takes full advantage of his lengthy solo space to do something excellent as well. Froman kicks the living h out of the drums to catapult the band into the stratosphere, and pardon me if I say that there is far too little of such kicking on the average recording these days, or let's just say there could be more of it. He does his own version of the kicking, too. And Cass stays right there on bass with great walking note choices and a full head of steam.

I'd say this is undoubtedly one of the finest live jazz recordings of late last year, no doubt in my mind. It has it all going, and serves notice that Noah Preminger is setting his controls for the distant stars, on an original flight path. We will see what else he is going to do, but this one is essential listening! Huzzah! Yo!


Posted by Grego Applegate Edwards at 6:26 AM