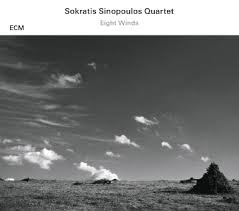 What is the lyra? It is a bowed string instrument with a special sound and a long history. Sokratis Sinopoulos is nearly single-handedly bringing us a renewed interest in and appreciation for the instrument and its key role on Greek musical history via a number of albums on ECM. Today we consider his first album released on the label under his own name, the Sokratis Sinopoulos Quartet and their Eight Winds (ECM B0024390-02).

The quartet came to being after Sokratis encountered pianist Yann Keerim and found in him a sympatico musical vision, this in 2011. They discovered in turn bassist Dimitris Tsekouras and drummer Dimitris Emanouil as the right sort of imaginative players and we now can appreciate the four and their special approach.

This is music that emphasizes Sinopoulos' plaintive, beautifully singing lyra tone in a series of balladic and folk-laced originals put together by the leader. They have an ECM jazz sort of immediacy, an open spaciousness and a pronounced lyrical quality tempered at times by gently driving dance-like rhythms that have deep roots but a modern transcendence as well.

There is much in the way of ravishing melody to be heard, principally in the lyra folk-jazz effusions but then too in pianistic parallels and robust folk-jazz rhythm section roles.

It is an extraordinarily engaging set for those willing to set aside expectations and let the music speak in its own language. Sinopoulis is a true artist and the quartet a thing to revel in. Definitely and heartily recommended.