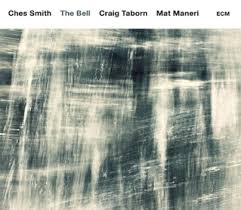 Chamber jazz has come an exceedingly long way from the days of John Kirby or the Duke-Strayhorn-Pettiford sides, so long that many readers may not know the recordings I allude to in this sentence. No matter for now. The advance of the idiom brings us no closer to the future than with the new trio recording of drummer-composer Ches Smith, The Bell (ECM B0024388-02). Eight Smith compositions are featured, as played by Ches on drums, vibes and tympani, Craig Taborn on piano and Mat Manieri on viola. These form a near ideal triumvirate in their exacting attention to detail and their concentration on sonic expressivity.

These are very modern effusions that owe something to the tutelage and "good ideas" Ches absorbed from Pauline Oliveros, Alvin Curran, Fred Frith and William Winant during his studies at Mills College. But then it is what he has done with the conceptual frameworks suggested to him by these luminaries that puts his music in a special place. The pieces were written with this trio in mind, with their ability to take the frameworks and create a spontaneous in-the-moment immediacy that blossoms forth here dramatically, strikingly with the special ambient sonic carpet created by Manfred Eicher's production.

There is an intelligent introspection to this music that has the ability to break out into more extroverted dramatics without breaking stride. That is the sort of seamlessness that this music embodies.

It is something that stands out and manages to be outstanding without calling attention to itself in the more overt ways. It is a special set. Impressively, so.  Movingly, so.

If you happen to be in NYC on this March 25th, the trio is playing at the Rubin Museum of Art. Check the net listings for details.
Posted by Grego Applegate Edwards at 6:00 AM