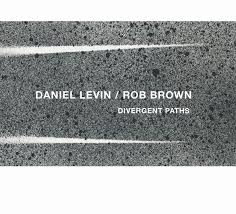 When two of avant improv/free jazz's most compelling and original players get together as a duet after a long history of sharing musical space, you can expect something very good, if everything is right. That is so on Divergent Paths (Cipsela 003), a convergent divergence of two great artists, Daniel Levin on cello, Rob Brown on alto sax, live on a Sunday afternoon in Coimbra, Portugal, November 2012.

This is in fact the second album of the two as duet, the first coming out some time ago on Not Two as Natural Disorder. I cannot speak for that one as I have not as yet heard it, but this one I have been listening to closely.

Part of what makes this so interesting is the visceral sounds each coaxes from his respective instruments. They contrast in the vibrations they set into the air--the cello rich in its stringed overtone complexities, the alto in the advanced harmonics and wide spectrum of sax sounds emitted. Both have worked hard at their sound, which unsurprisingly is a central touchpoint in the improv situation.

So the very color of the timbres hits you first. Then there is the sheer inventive mass of good ideas both Rob and Daniel put forward, Rob a master of line-weavings that have the history of the music underpinning his fluid and unexpected juxtaposing but a clear sense of what is his especially, Daniel bringing in the historic baggage of cello history with an occasional nod to contrabass roles, but working on the varied attacks possible and countering Rob with his own special idiomatic originality.

It is extended open invention with plenty of time and space to allow the two to create long dialogic musical conversations of brilliance. I will not attempt to give a blow-by-blow description because you are better served in the actual hearing. I will say that this is some very fine, very high-level duo advances, showing us the special sensitivity and two-way loops of musical ideas as they coalesce. These are players, true artists, intent on listening closely to one another and responding either in kind or, as the title suggests, purposefully divergently. It is a study in contrasts and confluences, togetherness in independence, inspiration in immediacy.

And so I do suggest you get this one and listen. It is a testament to the importance of these two artists and what they can come up with when left with freedom and time to create worlds of concentric sound.