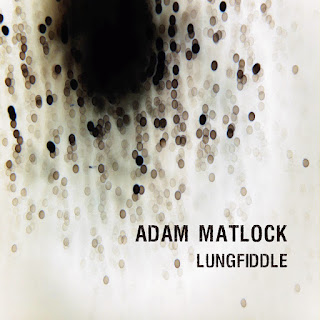 Of accordion players in the new and avant realms there may not be all that many we are exposed to but there are more and more of them it seems. Adam Matlock is one. He's been showing up on sessions in good ways lately and he just sent me his album, thankfully. It's called Lungfiddle (Off Records) and I've been listening.

He manages to create a new sound with just his accordion. There are seven compositions/improvisations on it and they caught my ear. He's doing a sort of post-minimalist avant thing, not exactly jazz and not exactly new music but somewhere in between.

It's a sort of originality happening here with something interesting going on throughout. Don't ask me what it sounds like because it sounds like itself. Some musical ideas repeated and branched off on, some voicings and drones you do not expect, rather brilliant transitions to unexpected realms, and a sense of line that stands out. There's generally a solid key center and it's tonal but sometimes pretty outside what harmonic-melodic expectations you might have, especially from an accordion.

It is fascinating stuff. Adam Matlock is an original. Definitely recommended.
Posted by Grego Applegate Edwards at 6:05 AM