J. Blake Fichera, Scored to Death, A Conversation with Some of Horror's Greatest Composers 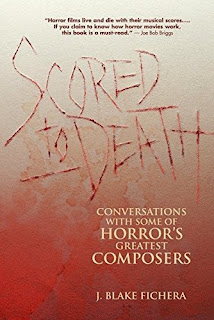 You no doubt have a favorite horror film. And as you think back to it you may also recall some of the music that was a part of it. Virtually everyone remembers the shower scene in Hitchcock's Psycho and the screeching violins Bernard Herrmann wrote for it. Yet many of us are ignorant of the intricate interactions both technically and aesthetically that go into the creation of effective soundtracks for a great horror film.

J. Blake Fichera, a horror film fan, film music commentator and musician, has gathered some of horror's most prolific living soundtrack composers, some 14 in all, and interviewed each individually on his art, on what it takes to put all together in a finished product designed to scare the hell out of you.

The substantial dialogs are now out in a fascinating, provocative and entertaining 356-page book entitled Scored to Death: Conversations with Some of Horror's Greatest Composers (Silman-James Press, paper, $19.95).

Each composer tells a bit about what got him started as a soundtrack composer, the creative process of making a great soundtrack, his interaction with directors, producers, sound-effects people and other key personnel, time frames, budget considerations, personal idiosyncrasies and the various stages of composition that take place.

The changing role of technology over the years, both in audio production and synchronization are key themes as well. How much of the music is extensively mapped out in terms of timing? What is the role of the director in the ultimate outcome? What has happened as composition essentially went from a demo tape, a rough score or a simple live piano demonstration in the old days to the ability now to lay down a live, multi-track demo directly onto a copy of the digital film? How has the expectations of directors changed over the years?

All this and very much more is what makes the book great. The recollections of the composers on specific films and how the end result was reached is the most interesting part of the book, I would say. But it is fascinating as well to take in the particular influences a composer has had in his work and how he uses them, whether it be rock, electronic synth music or avant garde modern classical, or you-name-it, and the spectrum of inputs one can get from a director, whether it be vague impressionistic thoughts or very specific directions.

It's one of those books that virtually reads itself. You find yourself drawn into the subject and the pages turn quickly.

Scored to Death stands out as a lively set of insightful interviews that in the end gives you a very good idea about how the music comes to be and its function in the making of a modern horror film. I recommend it highly.
Posted by Grego Applegate Edwards at 7:02 AM