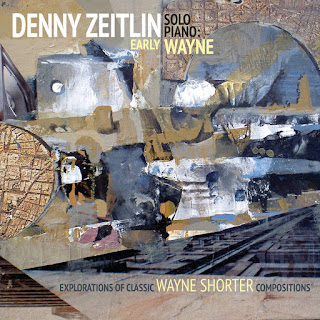 When a jazz composer's work sounds as fresh as ever decades after being written, that is a sign of the lasting value of the music. The beautifully creative pianism of Denny Zeitlin gives us some extraordinarily new life to Wayne Shorter classics on his recent Solo Piano: Early Wayne (Sunnyside SSC 1456). These are pieces that already have great cache these days, and Denny manages via  swinging, substitutions, displacement and brilliant improvisations to give us a very rewarding new take on them all.

As early as 1971 when I was at Berklee it seemed that a lot of students would pull out some Wayne classics in those impromptu sessions in the practice rooms that were so important to me in the short time I remained there. Songs like "Speak No Evil," "Nefertiti," "Ju Ju," "Infant Eyes" were sounding really great right about then and here we are some 45 years later and they still sound revolutionary.

But in the hands of Denny and a solo gig we hear them even more vividly. Of course Zeitlin has had the touch and the feel for stretching music since he first started out. And with this album he reminds us how deep he has gotten into the four-dimensional world of Zeitological piano.

All you have to do is put this CD on once or twice and I wont have to say another word. It's a shining example of what sort of brilliant things Denny Zeitlin does these days.

No kidding, just get this one and hear it. You'll be very glad you did, I think.
Posted by Grego Applegate Edwards at 6:15 AM