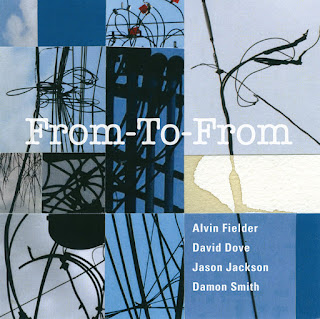 Here we have a nicely energized set of free-avant jazz from Houston. It is another goodie in Damon Smith's Balance Point Acoustics catalog, bpa15 to be sure. From-to-From puts together some masterful spontaneous improvisors in vet titan drummer Alvin Fielder, trombonist David Dove, alto, tenor and baritone player Jason Jackson, and bassist Damon Smith.

It's a series of six off-the-cuff free improvs that show fully balanced strength between front line and rhythm. Dove and Jackson come through with fully expressed testification while Jackson and Smith make a thoroughly cohesive team as both chargers of the forward motion and line weavers in very much their own right.  David Dove, as William Parker's liners so aptly note, has been instrumental as main force behind the local cooperative Nameless Sound, keeping the spirit alive among the improvising arts community and ensuring that regular appearances of other improv giants inspire Houston's best in a series of concert gigs that mix it up.

What's key to this album's success is how central what all four are doing, by themselves and altogether.

Another factor is the free jazz-soul element. These four are letting the spirit-feel show itself consistently. They "tell it" and we are there for sure. Though shouting encouragement to a prerecorded sound event is of course not going to get to the players, you still feel like encouraging them on with "go!" "whoo!" or whatever a committed audience does these days.

It's that kind of set. Something to shake the starch out of your shirt with, if you can dig?

It's nicely fired-up music by an excellent quartet. So get a copy!
Posted by Grego Applegate Edwards at 6:33 AM