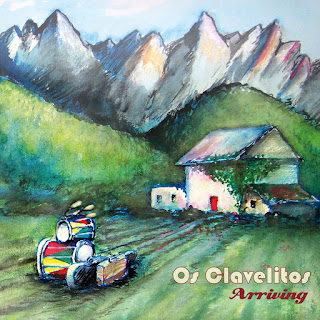 Anyone who loves Brazilian samba-jazz will want to hear the band Os Clavelitos and their release Arriving (Suonafrittata oc313). It is an album of very attractive originals, and with the real percussive drive of samba and the very directly sweet sound and impeccable pitch control of lead vocalist Chieko Honda you will be happily reminded genetically of Flora and Airto and/or those Corea albums that featured them. But Os Clavelitos are original, too, very much so.

The rhythm team sets up the solidly flowing, real samba grooves that give us foundational strength--Uka Gameiro on drums, Arei Sekiguchi on percussion, Dan Kendall on bass, cavaquinho, and accordion, and Anthony Lanni on guitar. Livio Almeida on tenor, soprano and flute gives us nicely the jazz solo strength that spells the vocals well and lifts the music to a higher plane.

The songs are just great, many by Lanni and/or Kendall and three by Honda. They have lyrical clout and work nicely against the samba feel.

They have it all. I listen and continue to grow with the process. This is just fabulous music that any samba-ista will take to readily. Beautiful! Grab it!
Posted by Grego Applegate Edwards at 6:11 AM