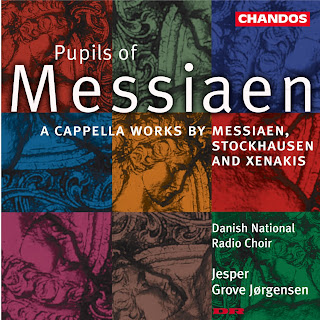 The high-modernists did not typically work within an a capella choral framework. In fact the heyday of such a grouping belongs to the Middle Ages and the Rennaissance. After that there is a precipitous decline, except in religious-based music where of course liturgical traditions help encourage the continued emergence of new compositions for vocal groupings.

Given that, todays CD (Chandos 9663) (which has been around for several years) of unaccompanied choral music by Messiaen and his pupils Stockhausen and Xenakis is especially welcome. The Danish National Choir under Jesper Grove Jorgensen capably perform seven mostly shorter works by the three master composers.

There is something about more complex harmonies when sung by a choral group. They have a kind of potency not always present if those note clusters are sounded by instrumental ensembles. Somehow you feel the beating of the tones and overtones against one another more directly--and that may have something to do with our biological construction as humans and the way we instinctively respond to the human voice.

Be that as it may I only wish to suggest that the CD at hand provides you with a rather different glimpse into the musical minds of these musical architects. For that reason alone the CD is fascinating and should be heard by all those interested in modernism and its development in music.
Posted by Grego Applegate Edwards at 5:45 AM