The ICP Orchestra Continue Their Remarkable Odyssey in Self-Titled Album 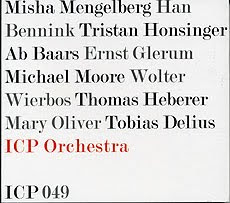 The Netherlands have as one of their most enduring and worthy cultural exports the madcap ICP Orchestra. They've just concluded a US tour and their rather recent self-titled CD (ICP 049) maps out why they remain a vital musical organization, whether caught live or, the next best thing, through the electronic medium.

The ICP folks have been "post-modern" long before the term had currency; and they continue to be now that the term is on the outs. Just like most musical categorization catch-phrases (except perhaps the ill-fated "Boston Sound" moniker attached to rock bands like Ultimate Spinach in the late '60s), a phrase for all its reification does point to a certain stylistic bundle of features. So if you try to apply the phrase to the ICP, you would not be incorrect to point out how the big band combines the avant with the street-corner song of some early 20th-century iceman, bebop and swing with a dusty old polka refrain, dead serious art with a giant pie-in-the-face. Polystylistic tendencies, then. But what's so interesting is that whatever they do, it has a recognizable ICP sound. Like the Art Ensemble, or to go further afield, Spike Jones and his band of the swing era.

The self-titled album is quite typically brilliant. It documents two 2009 ICP appearances at their famed Amsterdam home, the Bimhuis. It's a ten-piece lineup with a potency derived (like Duke's) from the unique musical personalities of the key members of the unit over the years, i.e. Mengelberg and Bennink along with Baars, Moore, Wierbos and so on. The rest, the pieces, the arrangements. . .

It's the combination of virtuostic anything-goes free improvising with anything-also-goes arrangements, here of a couple of Herbie Nichols and Duke Ellington gems along with a host of wildly varying sonic onslaughts of fun and work; originals that is.

They have become more and more influential as they continue to thrive. If you missed their tour of the States like I did, the next best thing is this CD, which I do highly recommend.
Posted by Grego Applegate Edwards at 5:43 AM