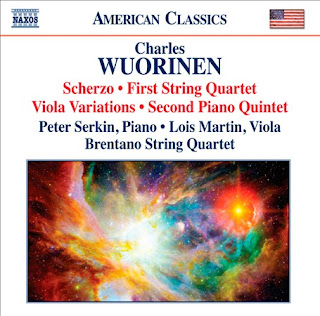 Naxos has done a fine job producing and making available at budget prices state-of-the-art recordings of modern American composers in an extended series of individual volumes. The music of Charles Wuorinen is a good example. By my count the CD up for discussion today is at least the fifth one released, and it's a good one.

Chamber Music (Naxos 8.559694) covers three works from the past decade, all getting their world-premier recording, and one classic work from 1971, the First String Quartet. If the new works represented are any indication of an overall trend, Charles Wuorinen seems to be returning to and rethinking his stance on the modified high-modernism that made his earlier reputation and in which he showed such brilliance. By around 1971 he had received a Pulitzer Prize for his electronic work Times Ecomium, was an influential member of the music faculty at Columbia University, and was well-represented in recordings of his music. His String Quartet was made available in a Turnabout recording released at the time, and it remains an excellent example of the logic and lyricism he brought to the sound and operating procedures of the serial/post-serial music then current. The work wears well, as the fine version of the piece on the Naxos release attests.

As time went on Wuorinen modified his compositional stance somewhat to incorporate more conventionally tonal elements and linear form that recalled the styles of the classical past. His music remained seminal but perhaps the predominance he enjoyed in the early '70s became a lesser factor as other composers and other stylistic trends came to the fore. But he has continued to create music that I believe will hold up well in the years to come.

And so we move on to today and the three later works included in the present volume. They are very well-performed by pianist Peter Serkin, celloist Fred Sherry, violist Lois Martin and the Brentano String Quartet. The centerpiece surely is the Second Piano Quintet (2008), a four movement work of great energy and expressiveness, with an unusual return of the third movement at the end of the work.

I will not attempt to describe the working means by which Wuorinen creates his music, past or present. I leave you to the excellent liner notes accompanying the disk. For the lay listener, what matters ultimately is the modernist beauty that combines stark, somewhat severe passages with passages of great momentum and cumulative kinetic flow.

Wuorinen continues to be one of the most important compositional voices active today. He and Elliot Carter form the Yin and Yang of contemporary American modernism in many ways. This recording combines exceptional compositions with superior performances. Anyone interested in modern music should hear it. Very much recommended.
Posted by Grego Applegate Edwards at 5:48 AM