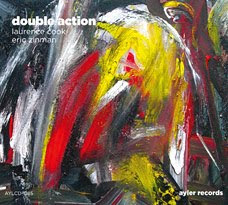 New-England based avant jazzmen Laurence Cook and Eric Zinman each have an impressive track record in improvisatory music. Laurence has played drums and percussion in a number of important ensembles over the years; Eric Zinman's pianism has been a central part of significant live and recorded dates.

For all that, one might nonetheless be unprepared for what happened when the two began working on a series of duets in 2009. The fruits of that collaboration can be heard on Double Action (Ayler 085). Eric plays on a Yamaha Stage Piano throughout; Laurence alternates between drums, percussion (including mallets) and a Casio keyboard. What you get with the increased timbral palette of this set-up is an almost orchestral ambiance. The two make maximal imaginative use of the wide variety of musical sounds available to create a series of sound poems, "free" yet the opposite of random; serious yet playful; self-determined yet almost selfless in their dedication to the ensemble whole. This is not your grandpop's bebop; it's not your dad's "free jazz" either, should you have had a free-jazz dad (I didn't, but I digress).

This is sound-color painting of an ingenious and musically stimulating sort. It has electronics and acoustics woven together in a fabric that dazzles with its colorful patterns yet can be "worn" frequently without aesthetic fatigue setting in. It is a tribute to their impressive musicality and imaginative timbral sensitivity. It is a bold statement of intent, a declaration of independence from rote repetition and an enslavened compulsion to repeat what has gone before.

So do I like this music, then? Yes, I most certainly do. If you are looking for something rather authentically "new" out there, Double Action is that. Bravo!
Posted by Grego Applegate Edwards at 5:26 AM