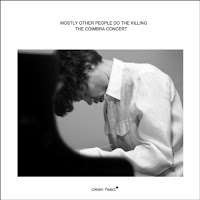 Live jazz has traditionally gained a certain cache among the cognoscenti. In the age of the 78, artists were limited to the three or four minute cut; live playing allowed them the stretch out. With the advent of the LP, artists could go on for quite a bit longer, which they started to do on Prestige albums in the early '50s and everywhere else after that. The CD enabled even longer stretches, as we all know. Nonetheless the live situation puts improvisers in less clinical environments, ideally in front of an appreciative audience. So there has still been something to be said about the live appearance and the live recording for capturing jazz at its uninhibited best.

The appearance of a live 2-CD set of Mostly Other People Do the Killing [The Coimbra Concert (Clean Feed 214)] naturally brought out a set of heightened expectations when I took it out of its mailer several weeks ago. MOPDTK in the studio can be boisterous and wild. What will the band live sound like? More so? To jump ahead, I was not disappointed.

This is a fine band. Peter Evans (trumpet), Jon Irabagon (tenor and sopranino), Moppa Elliot (double bass) and Kevin Shea (drums) are some very impressive new players on the scene individually, and together they rise to some high places indeed.

So we have the band in a live concert. As is often the case with this band, the cover is a send-off--this time of a Keith Jarrett album. It has a shot of an intensely introspective pianist going to it on the cover. Between the gatefold and outside covers, all four band members are shown being expressive and intense at the piano, only, of course, the joke is that there is no piano on this record or as a part of the group!

The music? Like the ICP Orchestra and the Art Ensemble of Chicago, MOPDTK can indulge in outrageously exuberent semi-parodies and pastiches of past jazz styles. The approach shows a profound respect for the forms, but also a kind of over-the-top playfulness that is not unlike a kid getting out of hand with the fingerpaint. There is no adult present (so far as I can determine) to stop the "nonsense" and so it beautifully and delightfully continues through the course of two long CDs worth of music. And they do some "serious" playing here throughout as well.

It's another fine outing from a band that has become an essential part of what's going on that's good in today's jazz. They combine the "in" of tradition with the "out" of near-perdition in their own very considerably musical and very considerably hysterical way. I mean that in a good way.

MOPDTK has become a group one should not miss. This set shows them growing as a band, glowing as individual players, and having a hell of a lot of fun in the process. Yeah!
Posted by Grego Applegate Edwards at 5:56 AM