The Orchestral Music of Jack Gallagher, Beautifully Performed by the LSO 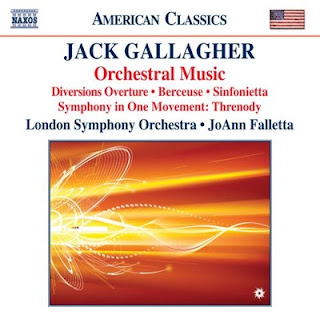 Present-day American composer Jack Gallagher may not be a name that is heard often in the music chatter that flows through the internet and, alas to a lesser extent these days, the printed medium. But it probably should be. The composer was kind enough to send me a copy of this Orchestral Music (Naxos 8.559652) and I am very glad he did.

The first thing that hit me was the lush beauty of the London Symphony Orchestra's performance of his works under the direction of JoAnn Falletta, and the brilliant soundstaging achieved at London's famed Abbey Road studios.

Then there is Jack Gallagher's music. It is orchestrated excellently. It is quite lyrical. I'd say it reminds me a little of the symphonic Howard Hanson, in the sense that there is a melding of craft and passion that has an American robustness to it, and it has a traditional neo-romantic quality about it. But that would miss out on what strikes me a little more about these works--that is the very fertile melodic inventiveness that pervades every movement. So perhaps think of Roy Harris and his long melodic phrasing. Only, of course, this is Jack Gallagher's music, which is something unto itself.

The CD covers works spanning a wide period, from the short 1977 "Berceuse," the lively "Diversions Overture" from 1986, and on to the two major works represented, his "Sinfonietta" written in 1990/2007, and the "Symphony in One Movement: Threnody" from 1991. The latter two works are the most substantial and rewarding for this listener.

All I can tell you is that I've gotten a great deal of pleasure listening to the music on this Naxos disk. From the evidence of this recording Dr. Gallagher is not one of the explorers of the frontiers of musical practice. He stays in a place where he is obviously quite comfortable and then creates music that has richly lyrical overtones.

If you like the idea of that I have little doubt that the music will give you the same pleasure it is giving me!
Posted by Grego Applegate Edwards at 5:10 AM