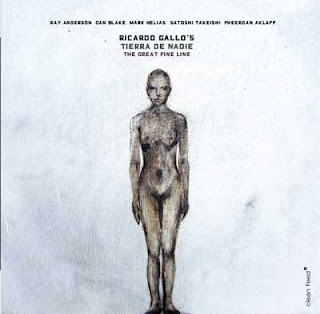 Some free improv dates are neither here nor there. Ricardo Gallo's The Great Fine Line (Clean Feed 209) manages to avoid that. It's here. By that I mean it has an immediacy. The composed sections structure the freedom in ways that bop heads frame the improvisations. Only this is not bop derived in any palpable way.

But like for example one of those Sonny Simmons ESP dates from the '60s, there is the framework of the melodic head routines and there are rhythmic-harmonic and melodic turning-pivoting points that the soloists work within. Those structural elements provide a scaffolding to the proceedings. And they do so in varying ways.

On the level of the players themselves there is good musical event making. Gallo is a pianist who works out of structures himself, regardless of whether they are those set up for the band's improvisations or just self-imposed. So in that way his playing is a microcosm of the larger group context.

Trombonist Ray Anderson plays himself, which makes him a good addition to just about any date I can think of that he has been on. He can get flat-out boisterous but there is a more introspective side to his playing as well.

And he makes a good contrast with fellow front-liner Dan Blake, who is mostly on soprano but straps on his tenor for two numbers. Blake is a little chameleon-like, tailoring his improvisations to the moment. His soprano work comes off more convincingly than his tenor on this date, but of course that may just be the luck of the draw and what take ends up being used? That's only speculation. At any rate the two engage in effective and consistently interesting two-part improvised counterpoint at times, and that gives you some of the high points of the set.

Mark Helias is his dependable inspired self here, whether arco or pizz. Satoshi Takeishi and/or he and Pheeroan Aklaff provide a dynamically loose and entirely appropriate percussive foundation for what is going on.

Gallo the bandleader is quite present here in the choices made on who does what and when; Gallo the pianist I would like to hear more of in a smaller context to get a better handle on where he would go, but what he is doing on this one shows that he is a player of promise--like Andrew Hill in his prime, Gallo is dedicated to doing what fits his compositional stance. And finally Gallo the composer of heads, tails and centers certainly comes through here in good ways. He DOES do a short duet with Aklaff on "Improbability," and it comes off as slightly tentative but not uninteresting.

Those who don't have the money for everything may find this one less indispensable than some other new releases. But protracted listens may well make you a believer. It is a fine band and Gallo puts a singular stamp onto the proceedings in ways that make me want to hear more of him. I am glad I have heard this one and will most definitely be listening more. So there you are.
Posted by Grego Applegate Edwards at 5:38 AM