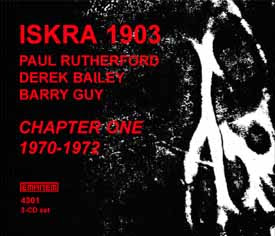 Trombonist-pianist Paul Rutherford, guitarist Derek Bailey and contrabassist Barry Guy formed Iskra 1903 in 1970. "Iskra" is the Russian term for "spark", the "19" indicates the century they were in, and the "03" stands for the number of players involved. Chapter One covers the life of the outfit from 1970 through 1972, amasses the various released records the trio made for Incus and other labels, and includes some unreleased material as well (Emanen 4301). The three-CD set is a fascinating document, an uplifting listening experience and a bit of a landmark in avant improv loquaciousness.

All three by then had developed a vocabulary, a technical prowess in creating a music not of tonality and often not even of conventional tones. Bailey's prepared guitar and his unconventional use of harmonics and muted sounds formed a very original third of the tripartite orbiting of guitar, bass and trombone sound-color production. The trio used both amplified and acoustic versions of the instrumental output to further vary the timbral spectrum available to them. Each performance was an improvisation that maximized interactive dynamics in a music of semi-pitched and unpitched sounds.

They weren't the only ensembles doing this sort of thing over in Europe and there were overlapping affiliations with Evan Parker and others over time. Iskra 1903 were perhaps one of the most consistently productive units of the period and in their stylistic purity, one of the most innovatively radical.

Chapter One presents the trio in all their heady glory. The three disks give you a great deal to absorb, and not all of it is equally inspired, understandably. But the high points are exhilarating and at all times they strive with success to converse intelligently in a radical new music language. This is somewhat essential fare for those with an interest in the Euro-improv scene of those days. Recommended!
Posted by Grego Applegate Edwards at 5:09 AM