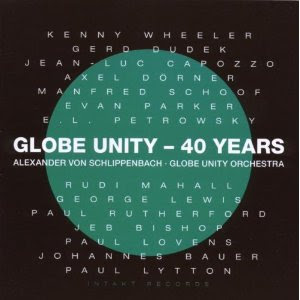 In 2006 the venerable European Avant Big Band celebrated its 40th anniversary with a special appearance at JazzFest Berlin. That and a concurrent studio appearance were captured electronically for the release Globe Unity - 40 Years (Intakt 133 2007). Sometime around then when I had actual money to buy CDs this was one of my purchases. Being nothing if not systematic I am just now finding it at the top of my ancillary "to review" pile. I say all this only to explain why I am reviewing it a little later than I ordinarily would. As it's an important disk, better now than never seems to be applicable.

The aggregate charges through some great charts by Herrs Schlippenbach, Breuker, Wheeler, and Lacy ("The Dumps").

There's nothing bad to say about this one. Some of the best in the free-avant fold pack a soaring, hard-hitting punch individually, collectively and compositionally. When the full band improvises as a whole, look out! And of course the churning rhythm section provides an everywhere-at-once cushioning for the advanced soloing that graces the soundstage.

This is a burner, a scorcher and flat-out out the window much of the time. There are many great releases one can sample of this band over the years. This is definitely one of them.
Posted by Grego Applegate Edwards at 4:21 AM