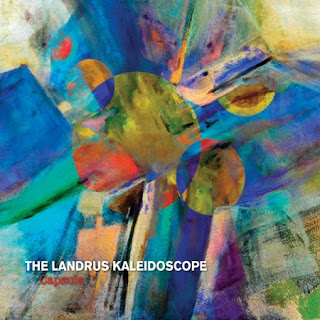 Time marches forward and styles of jazz march alongside those of other musical genres in terms of a coterie of committed listeners, some hangers-on and those with a casual or newly minted appreciation of the music. Subsequently there are jazz releases that may appeal to some segment of jazz listeners, some just those with a casual involvement, some for the hard-core appreciator, and some, but very few, to all.

Brian Landrus fronts his Landrus Kaleidoscope on the recent CD Capsule (BlueLand 2010A) and provides a musical take that might possibly appeal to a greater spectrum of listeners than is the norm. It's jazz-rock with an electric-acoustic mix of keys and electric bass (Michael Cain), electric guitar (Nir Felder), acoustic bass (Matthew Paris), drums (Rudy Royston) and Brian on baritone sax, bass clarinet and bass flute. (See also my review of Landrus's previous album, posted June 13th of last year.)

It's the sort of thing that may appeal to those who like jambands, the jazz-rock fans and even some causal listeners who are flirting with the mainstream contemporary facets of the music scene.

What I like about this one is that it has a hard enough thrust to it that it cannot be accused of pandering to the sofa-bound slobs who crave a sort of muzak, it has decent soloing from all the usual suspects, and it is a music that is MUSICAL, not a kind of exercise in product creation. And Landrus's sound on the three lower-frequency instruments gives it a distinctiveness.

I do not know what the fate of music like this will be in some ultimate sense, in particular whether this album will capture the hearts of a great many, or even a fair quantity of people. I do know that it has that potential. And in the process it gives out with some music that is not at all vapid.
Posted by Grego Applegate Edwards at 5:06 AM