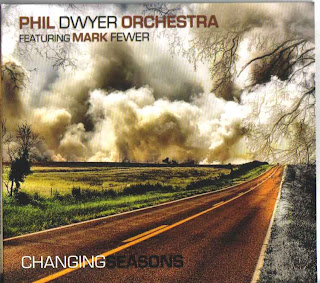 Changing Seasons (Alma 10252) covers in a little over a half-hour the four seasons. It is an ambitious work written by Phil Dwyer for his Phil Dwyer Orchestra, featuring the fine violonist Mark Fewer. Both the solo violin part and the work as a whole rather successfully straddle the fence between a vibrantly exuberant big band jazz sound and an orchestral classicism. Some of the tutti big band passages sound a bit on the generic side, a la the Jones-Lewis band of years back, and there is the occasional hint of the Gil Evans's touch. But the strength of the work is when that combines with orchestral writing and the very appealing fusoid solo violin performance.

The 35 minutes go quickly and there is much good music to be heard in that time frame. It's a very engaging listen. Bravo Mark Fewer, Bravo Phil Dwyer.
Posted by Grego Applegate Edwards at 4:55 AM