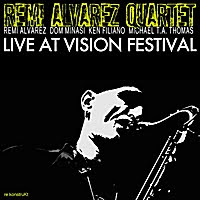 New York's annual Vision Festival gathers together some of the very best new jazz artists for a week-long festival that once and (one hopes) for all realizes Charles Mingus's idea of putting forth an east coast festival that does for the disestablishmentarians what Newport every summer does for the main(stream) garde of the music. The Vision Fest is a place not to hear the usual names of conventional jazzdom, but rather those adventuous artists who are carving a path through the rock-cragged present to a new future of the music.

So when the Remi Alvarez Quartet took the stage last year, they followed in the footsteps of the innovators who have gone before. The CDR/download album Live at the Vision Festival 2011 (Reconstrukt) makes clear to us (or me anyway) that they most certainly belonged there.

It's Remi on tenor and flute, Dom Minasi on guitar, Ken Filiano on contrabass and Michael T.A. Thompson on drums for a 40-minute set that sparkles and bristles with energy and invention. Maestro Alvarez has a great, slighty dark tone on the tenor and a bright flute sonority. He gives forth with post-Riverian-Aylerian chromatics that flow soulfully and logically. Dom brings texture and harmonically implied color into the musical palette of the group, suggesting tone-moods, expanding the backdrop of sound washes and freeing the music to flow into uncharted territory. Ken Filiano does much the same in ways in which he is well known to excel. Both Dom and Ken provide pitched counterpoint and solo energies that fit well into the proceedings. Drummer Michael T.A. Thompson frees the time and contributes well executed and inventive sound clusters from his set.

The sum total is some lively rebel music for a summer's gathering, a well-recorded high point of the year's festival. Grab it and you'll have something good to happily experience all year 'round.
Posted by Grego Applegate Edwards at 4:57 AM