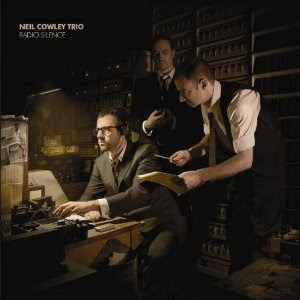 Piano trio acoustic jazz-rock? It's getting to be a kind of trend. You have the Bad Plus, Marco Benevento's Trio, the Shirts when they feel like getting into that mode, others. And there's the Neil Cowley Trio and their Radio Silence (NAIM 147) CD. Neil does the piano playing, Richard Sadler is on bass, Evan Jenkins on drums.

I suppose a lot of this started when the Jarrett trio got off on some rock-zoned excursions in the course of their otherwise standards-and-beyond stance. There was a prefiguration of that on the original Jarrett trio recordings with Haden and the late Paul Motian. And some early Joachim Kuhn trio work did sometimes go in this direction. But the groups that have been doing it don't necessarily take their playing out of the Jarrett or Kuhn "fake book" of style practices. Not all of them. Not even most of them. Neil Cowley's trio doesn't, anyway.

They do a mostly originals set here, far as I can tell. The group arrangements flow more naturally than perhaps the slightly more avant-ambitious Bad Plus. That's neither here-nor-there, I suppose. The pieces have memorability, the playing is together and the arrangements have a worked-out looseness that can be the hallmark of a worthy piano trio.

It's good music, well played. So if you like the rock piano trio idea, here's a fine example.
Posted by Grego Applegate Edwards at 5:32 AM