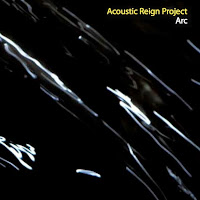 The Acoustic Reign Project came out with their first CD in 2003. They return with a new recording entitled Arc (Sol Disk 1102) and it brings nearly an hour of good sounds into your life.

The band is a nice mix of free improvisers: Jim Knodle, trumpet, Brian Kent, tenor, Reuben Radding, contrabass, Roger Fisher, guitar (on the final piece) and Jack Gold-Molina on drums. They rip through five numbers, tending toward the collective improvisational stance, broken into different groupings and cross-dialogues throughout. These work well and nobody is a stylistic stand-in for some iconic forebearer. They are themselves and what that is works effectively as a unit. The rhythm team of Radding and Gold-Molina lay a plastically solid foundation for the front line while soloing well themselves and the front line has good ideas that do not suffer in their execution.

It's a very solid go-round. Enthusiasts of the free-avant jazz avenues will find this a satisfying listen. One hopes we won't have to wait as long for the third. This second album establishes the need for more!
Posted by Grego Applegate Edwards at 5:15 AM