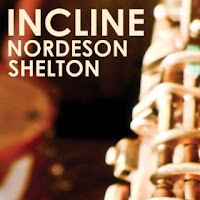 Nordeson Shelton is Aram Shelton on alto sax and Kjell Nordeson on drums. Incline (Singlespeed Music 009) is a set of freely improvised pieces by the duo. They found themselves working together in the San Francisco Bay area around 2005, first in a quartet on the Clean Feed album Cylinder, thereafter as the duo Nordeson Shelton.

Nordeson's drumming and his kit expand the usual sound parameters with an interesting array of metalic objects, small drums and large, and some trashy sorts of cymbals among the usual ones. He sets up interesting backdrops and counterlines to Aram's alto which has a creatively dry sound. Aram in turn creates less-standard sorts of lines than the usual free-horn barrages, though he is not above applying some heat at times.

Nordeson Shelton show originality and imagination on this one. It may sway a little towards the new music side of the nm-jazz spectrum but it doesn't short-change immediacy in the process. A promising beginning. Indispensible? No. Interesting? Yes.
Posted by Grego Applegate Edwards at 5:16 AM