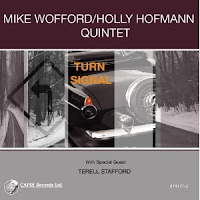 Mike's Wofford's well defined pianism and musical personality was an important component of Shelly Manne's last units. Holly Hofmann has been gaining increasing credence as a flautist of considerable resource and mainstream inspirations. Put the two together with Terell Stafford (trumpet and flugel), Rob Thorsen (bass) and Richard Sellers (drums), and give them some interesting material to work with and you have something worthwhile. That is, on Turn Signal (Capri 74111-2).

I like the repertoire, an original each by both leaders, some lesser-known jazz compositions, including Dick Twardzik's "The Girl From Greenland," and a standard ("Pure Imagination"). The arrangements are well wrought and create landmarks through which the improvisations weave.

Wofford sounds excellent on piano these days. A complete melodist-harmonist in the sophisticated tonal vein that Bill Evans most succinctly established in his own way, Mike Wofford in another. Hofmann has a beautiful tone, good ideas and some soul too. Mr. Stafford has equal solo billing much of the time and deserves the hearing he gets as a well-burnished noteful presence. The rhythm team knows where to put the pulse, embellishes and drives at the appropriate points, and gets in the groove.

So in the end this is thoroughly accomplished, thoroughly enjoyable straight-ahead jazz. It should have a wide appeal.
Posted by Grego Applegate Edwards at 5:36 AM