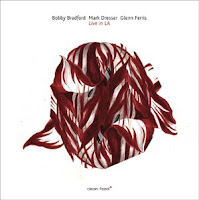 What are the chances that Bobby Bradford would be prominently featured on two disks in a row on this blog? It would be slim only because of the luck of the draw. Nevertheless it is happening today.

And so we have a trio of Mr. Bradford (on cornet) plus bassist Mark Dresser and trombonist Glenn Ferris, Live in LA (Clean Feed 241). There are trios with this instrumentation that seem wholly self-sufficient; others you ask yourself "where's the drummer?" Live in LA almost seems like the latter. The periodicity of much of the music (in a post-early-Ornette groove) seems to need the equivalent of an Eddie Blackwell back there polyrhythmically pushing it. But no. If that were the case Mark Dresser's fine bass playing and the liberties he takes might have been lost or hindered a bit. So the trio format allows Dresser to be a more fully front-lined member of the trio. And so it is.

That's the point of this one, I think. It's three important improvisers playing out of some head compositions, or improvising from the get-go, expanding their solo work and getting into two- and three-way collective improvisations too. It's good to hear Glenn Ferris again, onetime youthful star of Don Ellis's big band and an important member of Billy Cobham's Crosswinds ensemble. Perhaps his playing is a little less brash today, a little more mature, but no less striking. Mark Dresser is filled with good ideas throughout, as you would expect. And Bobby Bradford sounds terrific, as only he can in the way he does.

By the way, the "live" in the title refers to the immediacy of the music, not to the audience, which is actually not there in any audible sense. It was recorded at Bruce Fowler's house. The sound is quite decent.

So in the end this is a fine outing for all three, individually and collectively. Do not hesitate.
Posted by Grego Applegate Edwards at 5:17 AM