Danny Fox Trio, The One Constant 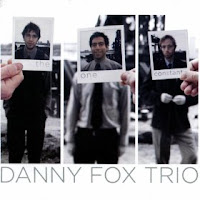 There are new and interesting things happening with the piano trio in jazz today. Acoustic rock elements and non-traditional forms appear increasingly in some of the new ensembles. The Danny Fox Trio is one of them, and their CD The One Constant (Songlines 1588-2) shows them forging ahead nicely with a very modern approach.

The trio showcases the individual and ensemble talents of Danny Fox, piano, Max Goldman, drums, and Chris Van Voorst van Beest on the upright bass. It's a program of interesting originals that unfold in interesting ways. There is a rock influence but they aren't exactly playing rock. They are playing new music with a straight eighth-note periodicity for the most part and there are ostinatos that contrast with counter themes in ways that make for interesting tensions. And there are rhythmic kicks built into the song-structures that both have a new music connotation and the anticipation-delay feel of big band music, at least as I hear it.

It's not a typically improvising sort of trio in the bop sense. Danny Fox improvises melodically-harmonically in ways that sound modern and relate to the themes introduced. But you won't hear a Bud Powell lick.

What the music gives you is in the NEW realm. It's involved and quite interesting. Hear them!
Posted by Grego Applegate Edwards at 5:19 AM