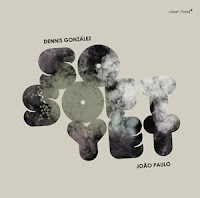 Dennis Gonzalez over the years has shown himself not just as a creative and masterful trumpet player and important bandleader. He also composes some excellent music and, equally importantly, he plays and conceives most everything with a sort of thoughtful compositional deliberation. I've never heard a release of his that didn't have its own reason for existence, a clear "thing" happening, a kind of focus.

With keyboardist Joao Paulo he has an ideal duo partner. Joao too has a deliberation in his spontaneity, a structural thinking inherent in his note and timbre choices.

So when they got together for a second volume of duets (see the July 6, 2009 article for a review of the first) these factors were again decisive in the resulting music, So Soft Yet (Clean Feed 243).

Joao Paulo gets a sound on the electric piano, plays a folk-free sort of accordion and uses the full scope of the conventional piano strings--plucked and sounded, dampened, regular key articulation, etc., to set the mood of each number. Of course it is also WHAT he plays that sets up the duet interaction. Simple pulsed riffs, freely unfolding tonal-centered flourishes, gospel-like rollers, lyrical balladic freedom, atmospheric ambiance, almost koto-like figures, rapid repeating and varying riffs that expand into free tonal interplay...I could go on.

And Dennis responds with a series of marvelous improvisations on C trumpet and Bb cornet, limber and eloquent, spontaneous and structured.

It's another enormously engaging series of duets that are as pleasing to hear as they must have been a pleasure to play. Hear this one!
Posted by Grego Applegate Edwards at 4:29 AM