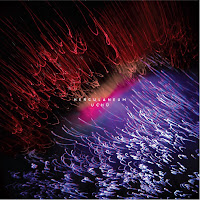 Here today we have the fifth album by Herculaneum, Called Uchu (Herculaneum Sound). It's an LP on limited edition vinyl.

The band, a sextet, is headed up by Dylan Ryan, the drummer, who pens many of the originals. The rest of the band is Nick Broste: trombone, David McDonnell: alto saxophone, Nate Lepine: tenor saxophone, Patrick Newbery: trumpet, and Greg Danek: bass. Uchu makes it clear that the band espouses their own brand of modern, well-composed jazz, with interesting ensemble routines and a fired-up rhythm section. There is good contemporary idiosyncratic tenor soloing from Lepine, but everybody in the front line can and does solo with accomplishment. They get some collective solo excitement going at times too.

This is new jazz--modern in the post-Holland, post-Byrne, post-Threadgill sense. It is fresh, tight, freely unfolding at times, and charging forward with some exciting music. I find it rather exhilarating. Here we have a band for our times. They deserve greater exposure and recognition. Nice album!!
Posted by Grego Applegate Edwards at 4:34 AM