Dick Wood, Not Far From Here 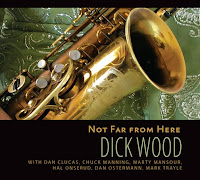 There was a soulfully raw sound in many of the new thing freedom bands in the early days that somehow seems to have all but disappeared in many corners of the free zone these days. Dick Wood's Not Far From Here (pfMENTUM 065) brings that back in no uncertain terms.

The band charges ahead throughout, led by Wood's alto and flute. With him are Dan Clucas, cornet, Hal Onserud on acoustic bass, Mark Trayle, electronics, and Marty Mansour on the drums. For two cuts they are joined by Dan Ostermann on the trombone and Chuck Manning on tenor.

Dick writes all the pieces, which have an early Simmons, early Dixon-Shepp-Cherry feel to them. The band blows through them with the conviction, looseness and fire of an early Art Ensemble, though I wouldn't go so far as to say that therefore they are the next AEC. The point is that they go about their music in ways that are not especially polite, and that's good.

This is a group effort with lots of cross-improvs and sounds both little and big. Nobody is going to blow you away as the improviser of the century, but collectively they get it very right. And that's refreshing. That's good to hear.
Posted by Grego Applegate Edwards at 5:54 AM