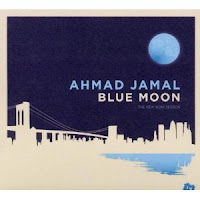 Pianist Ahmad Jamal enjoyed wide popularity, critical acclaim and a definite influence on other musicians through his trio recordings on Argo from the mid-to-later '50s and early '60s. Miles Davis himself admitted that Ahmad's playing and trio concept had an effect on his own music during that period.

It was a trio where the bass and drums had specific rhythmic and compositional-arrangement roles to fulfill that were unique for such groups at the time. And Ahmad rode on top of the flow, using space and harmonic-melodic-rhythmic looseness in very creative ways to bring out the three-way dynamic.

In his latest CD Blue Moon (Jazz Village 570001) he recaptures that brilliance, updated for today. There's a trio format plus added Latin percussionist. They have worked out a series of motives, grooves and rhythmic post-funk approaches to standards and originals in keeping with Mr. Jamal's original concept.

And Ahmad sounds great. All the loose concentration, the space, the creative verve, it's all there once again in a very attractive program. Great to hear him and his band sounding like this! Grab this one.

Posted by Grego Applegate Edwards at 5:03 AM