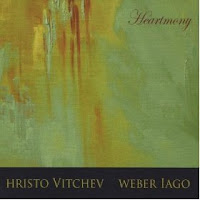 Heartmony (First Orbit Sounds Music 171) is the second duet recording between guitarist and composer Hristo Vitchev and pianist Weber Iago. Without intending to compartmentalize rigidly what is going on here, since music is always more than the labels one can pin on it, the two create a series of lyrical numbers that have some relation to middle-period Keith Jarrett and classic ECM duos. That is not to say that this is a case of overt lifts or lick-nabbing. The music has its own integrity.

The compositions stand out. And both Vitchev and Iago have developed their improvising chops to a point of definite individuality. You cannot pin down the players to a pat set of influences. They both spin solos that say something on their own terms.

Beyond that this is very memorable music. It is filled with sunshine and positive feelings. In that they have the same effect on me as classic Oregon. The mood brightens and one feels good afterwards.