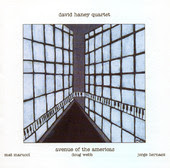 Pianist David Haney (now the chief force behind Cadence Magazine) comes up with one of his more unpredictable efforts on the recently released Avenue of the Americas (CIMP 386), which was recorded in 2008. It's a little different in that it teams up Haney with Doug Webb (tenor) and Mat Marucci (drums), the latter a tandem that has recorded a number of albums for the CIMP family of labels in a zone that's a little more straight-ahead than what David does. They are joined by Jorge Hernaez on bass.

Bob Rusch describes in the liners a series of logistical disasters that surrounded this date. It is in some ways a miracle that the music happened at all under the circumstances. But you can read those notes yourself so I will not go into detail.

Combining the near misses of getting it all together with the stylistic synergies and common-ground groping of the band members during the date leads to what turns out to be quite interesting results. Oft times Doug Webb plays in a post-Trane free/post-bop mode while David gets free post-Cecilian jabs from his piano. Jorge's bass often walks and Mat Marucci straddles the space between freetime and swingtime.

Mostly it hangs together with a frisson all its own. Honestly for the first listen I didn't quite get where it was going. Subsequent hearings put it together in my mind. There's not as much David Haney piano as you might expect but what there is keeps your attention and Doug Webb most certainly gets on a mainstem and stays there.

It's an album you have to listen to a few times. But then you are rewarded.

Posted by Grego Applegate Edwards at 5:13 AM