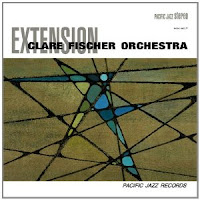 The 30-minute 1963 Clare Fischer Orchestra album Extension (Pacific Jazz 017) helped launch the composer-arranger as one of the finest, if under-appreciated, such practitioners of his generation. The album has been rather scarce in the years following its original issue. Thankfully it's available again in a finely put-together reissue package.

This is a West Coast date, of course, and includes some fine and sometimes rather unremembered musicians of the locale, Sam Most, for example, and Jerry Coker along with Bud Shank and Larry Bunker. Clare plays piano and organ throughout. It's a kind of big band-orchestra amalgam and the amassed forces give out with a rather large but often contrapuntally layered sound texture.

The late Clare Fischer has never been an easy one to pin down and it is as true of this album as the ones that followed. The influence of 20th century concert music, bop, cool school and Afro-Cuban elements combine here in rather masterfully worked-out sequences.

The remastering and packaging are exemplary, with a miniature reproduction of the original album two-panel design and text. It's very subtle music, mostly, and essential Fischer. You might want to grab this limited edition issue now before it disappears.

Posted by Grego Applegate Edwards at 5:21 AM