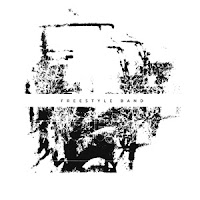 Freestyle Band put out an LP in 1984 in a limited edition. That album with the addition of two lengthy additional tracks is out again as the self-titled Freestyle Band (No Business NBCD 41).

It's an unusual ensemble of Henry P. Warner on clarinet and alto clarinet, Earl Freeman on bass guitar and piano, and Philip Spigner on hand drums.

A wide open sound they get, with Spigner's hand drums laying down a kind of free-Afro-Cuban barrage, Earl Freeman playing melodic figures of note on the electric bass and what sounds like a phase shifter, and Henry Warner freely charging forth on his clarinets.

The collective sound they get is not quite like any other, the closest being perhaps Chicago's Ethnic Heritage Ensembles in their classic phase.

Once you get on their wave length there is much to be appreciated. They explore the possibilities of sound and tone freely and imaginatively while each takes on a distinctive role. The music has some of the primal qualities of some of those early ESP disks, only it's most definitely their own thing that is happening. Kudos to the three! A treasure for the dedicated Afro-free-improv listener.