Steve Swell's Nation of We, The Business of Here, Live at Roulette 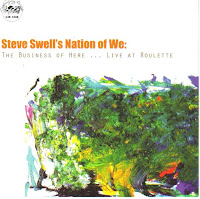 New York used to be now, according to Ornette's album title. It still is. It may not be a place to make much money, most of the time these days though--if it ever was for some things. But it is a place where trombonist-composer-bandleader Steve Swell could assemble 22 of the finest avant jazzmen and form the out big band Nation of We. And make an artistic success of it to boot.

They've had one or two releases out. Now we have the best yet, The Business of Here. . . Live at Roulette (Cadence Jazz Records 1238).

The business/logistic end of a project like this can be somewhat daunting these days: gather the musicians, rehearse, get the gig, play and record the proceedings, get the CD produced, pay the musicians, get the release out there, etc. Thanks to the persistence of all concerned, especially Maestro Swell, we have the release in our hands, in our ears, and it is worthy of all the efforts against all odds.

So here we have it...22 musicians holding forth at the Roulette club in NYC. There's Steve Swell of course, on trombone, composition, arrangements, conduction. And there are cats like Jason Hwang, Daniel Levin, Guiseppe Logan, Darius Jones, Sabir Mateen, Ras Moshe, Matt LaVelle, Dave Taylor, Chris Forbes, Todd Nicholson, Jackson Krall, and others.

Like the big bands of Sun Ra when on a certain planet, and those of Alan Silva and Barry Guy's London Jazz Composers Orchestra, this is BIG sounding music. This is "free" big band, with motifs, conductions, collective and individual solos. Most importantly it projects--excitement, complexity, energy, a hugeness of sound. And it does all that in the high tradition of the spirit feel.

In the second decade of the millennium, THIS is a big band that should be getting recognition. The Business of Here is a tour de force of imagination and execution. It is a band I hope we get to hear a great deal more from. In the meantime grab a copy. Everyone with an interest in the lively free arts should have one and listen carefully! The music is important.

Posted by Grego Applegate Edwards at 4:41 AM